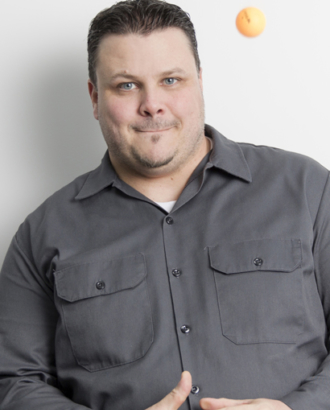 His first design project in NYC was:

While on a business trip to Memphis he:

Brett brings 25 years of design experience to his creative leadership at Thinkso. Witty and good-hearted, he is known not only for his bold visuals and highly conceptual work, but also for his commitment to clients and colleagues alike.

As Thinkso co-founder and executive creative director, Brett guides all of the firm’s corporate, cultural, and consumer design work. This has included the naming, branding, and design of DoResearch, Stanford University’s comprehensive, first-of-its-kind, online research portal; product naming and visual identity for the now famous S’well bottle; and the design and publication of Baylor College of Medicine’s BCMQ and The BCM Report. Other notable clients include Am Law 100 firm Cadwalader, The New York Times, and the inventor of electronic equities trading, Instinet.

Prior to founding Thinkso, Brett spent eight years at the international design consultancy Pentagram, where he was elected associate partner in 2003. There, he worked on high-profile visual identities for a variety of clients, including the March of Dimes, the New York Jets football club, and United Airlines.

Brett’s work is included in the permanent collection of SF MoMA and has been widely acclaimed in Communication Arts, Print, Wired, Metropolis, and The New York Times. His work has received awards from the American Institute of Graphic Arts, the New York Art Directors Club, REBRAND 100, and the Financial Communications Society. Brett has also twice been nominated for a British Design and Art Direction Award.

Brett earned a BFA in graphic design from Brigham Young University. He and his wife have two grown daughters, two pit bull rescues, and 13 chickens — most of whom reside at their home in southwest Vermont.